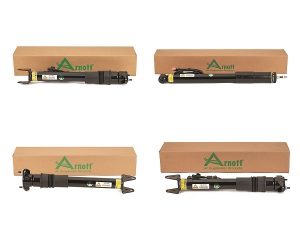 The thoroughly road-tested shocks are assembled in the U.S. and include new top and bottom mounts, a new polyurethane bump stop and protective dust boot. SK-3217 bypasses the often-problematic ADS system by incorporating a custom-valved shock and includes a coil resister which plugs in to the vehicle’s electrical system to eliminate any suspension dashboard warning lights. Both new R-Class rear shocks require no core deposit and are backed by a limited lifetime warranty in North America.

Arnott inspects, steam cleans, and spin blasts the O.E. shock to bare metal before it is recharged with new high-performance shock oil. Worn components, such as the piston, rod guides and seal pack are replaced before being repainted with corrosion inhibiting paint. The shock and damping coil are computer tested to assure O.E. performance and active damping functionality. Arnott remanufactures and assembles both shocks (SK-3197 and SK-3268) in the U.S. and backs them with a limited lifetime warranty in North America.

For more information on the company’s extensive line of affordable, high quality air suspension products for more than 20 vehicle makes including Mercedes-Benz as well as motorcycle applications, visit www.arnottindustries.com.